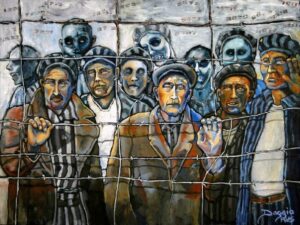 This is a short story of a short life.

There was a boy, 17, who worked on the farm with his parents in Germany.  He loved to sketch and paint.  He was quiet, sensitive and talented.  His dream was to attend art school.  When the shadow of the Third Reich reached the farm in the mountains, the boy was forced into the Nazi Youth and, soon after, was given no choice but to be a prison camp guard.  He endured that nightmare until it broke him.  He was killed, by dogs and bullets, while trying to escape.

Decades later, in a Past Life Regression session in England in my office, a hypnosis client recalled memories of that life.   After the session, the client remarked that previously they had wondered if they had been a Jew who died in the Holocaust.  That would have been the expected plot.

Often the mundanity of a past life is the greatest convincer of its veracity.  On the other hand, there are cases like this. in which the unexpected twist makes you pause and take a deep breath as a chill runs up your spine.

About the Author: Susan Dunlop